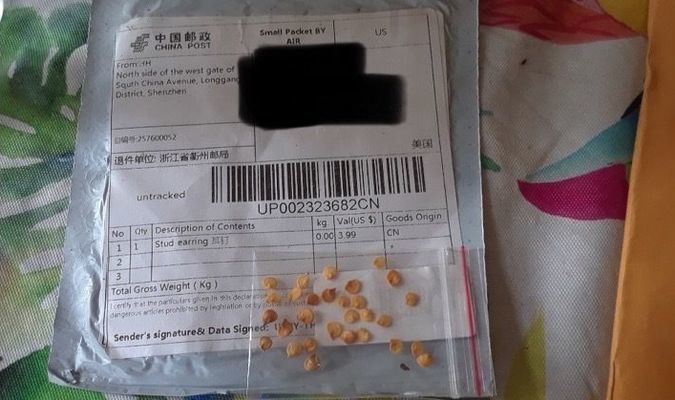 JEFFERSON CITY- The Missouri Department of Agriculture has received reports from residents of unsolicited seeds being delivered from foreign countries such as China and surrounding areas. Missouri’s announcement follows several states who have also reported packages of these seeds being delivered across the United States. Consistent with nationwide reports, the packages were labeled as jewelry, specifically stud earrings, bracelets and other accessories.

It is important to take steps to prevent the introduction of invasive species into Missouri to ensure safety of the environment, livestock and plants. The full risk associated with the seeds in question is unknown at this time. However, the seeds could be an invasive species that has the potential to destroy native plants and damage crops. Invasive species can also introduce diseases to plants and may be harmful to livestock.

1. Do not open the seed package.

2. Do not plant the seeds if you have opened the package.

3. Submit an online report to USDA verifying you have received unsolicited seeds.

4. Do not dispose of the seeds, packages or envelopes until USDA provides further guidance.

The Missouri Department of Agriculture is playing a cooperative role in USDA’s investigation; however, USDA is leading the effort from the federal level. USDA’s Animal and Plant Health Inspection Service is also working closely with the Department of Homeland Security’s Customs and Border Protection to prevent the unlawful entry of prohibited seeds and protect U.S. agriculture from invasive pests and noxious weeds.

If opened, place seeds in a sealed bag and contact the Missouri Department of Agriculture’s Plant Industries Division by phone at (573) 751-2462 or by email at aginfo@mda.mo.gov.

To learn more about the Missouri Department of Agriculture and its programs visit Agriculture.Mo.Gov.

Who has the best burger in Barton County?